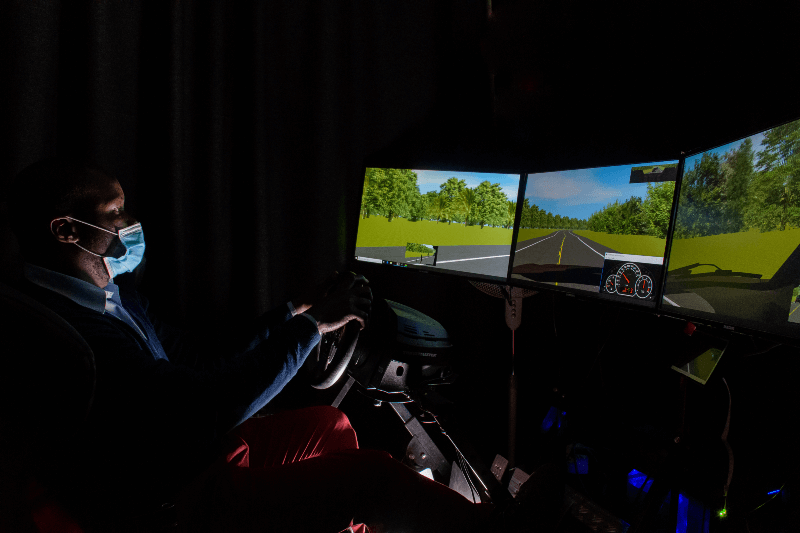 Driving Simulator: The Seven-Star Research Project that is Steering Strathmore into the Ranks of Road Safety Research Excellence

Have you commuted or driven in Nairobi lately? Even before the joke doing rounds that the City is 80% a construction site, Nairobi had in 2019 been ranked as the fourth most congested city in the world. These rainy mornings of being caught up en route work have probably turned you into an expert road Houdini using the mini side roads to get to your destination in good time.

It is this gnarly situation widespread on roads in the country, coupled up with intense disregard to traffic rules that has led to avoidable accidents, and cost county governments billions in lost productivity.

Globally, fatalities stemming from road traffic accidents have increased to 1.3 million per year. More than 93% of these accidents, occur in low-income and middle-income countries. WHO reports and various research undertakings in 2009, 2015 and 2019 have shown that road traffic deaths are severe on vulnerable road users such as pedestrians, cyclists and riders of motorbikes and their passengers; accounting for a staggering 46% of global traffic deaths.

In Kenya, analysis done by the National Transport and Safety Authorities (NTSA) report, in November 2020 stated that road safety continues to present significant challenges in the country as a result of the many lives lost on the roads. Human related factors such as speeding, reckless driving, dangerous overtaking, drunk driving, drunk walking, drunk riding, failure to use helmets, among others, have attributed to a 5.8% increase in fatalities as at 31st October, 2020.

This raises the question on whether existing policies have become perforated and are having challenges of following through the international safety standards. In a radical strategic move three years to the date, Strathmore University in collaboration with the University of Southampton and other international partners within the National Institute for Health Research (NIHR) UK, in an ambitious project, set out to examine common constraints and barriers likely to impede Kenya from reducing the current high mortality and morbidity from road traffic accidents. Funded by the Global Health Research Group (GHRG), the project would, on 16th May 2018, go on to initiate a Consultative Stakeholder Forum on Socio-Technical Approaches to Road Safety.

The forum would discuss in an in-depth model, the role of research in alleviating this worrying state of affairs as well as overcoming the barriers impeding Kenya in its strides. It would also provide a forum for the stakeholder community to learn how other countries are addressing similar challenges. The multi-country project titled “Sociotechnical approaches to road safety (STARS)” hinged its strategy on seven pillars christened the 7 E’s: Engineering, Education, Enforcement, Ergonomics, Economy, Enablement, Emergency.

“It made sense to a have a system approach as opposed to a linear one. The difference, you ask? My team and I decided to look at road safety from the locus of different actors and their critical contributions on the road as opposed to a linear tactic based on cause and action – which hasn’t quite worked before. What this means simply is that, for instance, a road incident is a failure accrued to the system and blame cannot be placed primarily on an individual. Putting it into perspective, recall the former Sachangwan black spot in the Rift Valley region? The road designs and topographies typically made it difficult for road users to leave unscathed.”

The hallmark of research excellence

In the pursuit of a solution to guarantee road safety, a myriad of variables such as road designs, proximity to settlements, location topography and terrain, and prevailing weather conditions come into play. These are quite difficult to study and capture.

Already enjoying the privilege of experienced researchers and a vibrant support team, the STARS Project acquired a state-of-the-art driving and road simulator designed by a French company that would not only allow them to recreate a section of or an entire road in its current state, but one that would also facilitate accurate redesigns of the road with road safety features such as traffic lights, speed bumps, and markings. “This simulator which is housed in the Strathmore University Business School (SBS) and the only-of-its-kind versatile technological equipment in Africa with a range of capabilities, mimics in impeccable detail, roads and road users’ behaviour and generates a report that goes a long way in informing road safety strategies,” adds James Oyoo, the Technical Lead of the simulator at Strathmore University.

Echoing the clarion call by Prof. John Odhiambo, the Vice Chancellor, for researchers in Strathmore to churn out meaningful research that solves societal problems, Prof. Kokwaro, with a lot of vigour and pride in his voice, says that “Our role as a University is to contribute to our country’s development. With the successful pilot simulations of the redesigned Mbagathi Road, Salgaa-Sachangwan Highway, and the Githurai bypass, we are confident that implementation of the recommendations given to our collaborator, National Transport and Safety Authorities (NTSA), will transform the road systems in Kenya – a step closer to achieving the UN Decade of Action Target of reduction of road fatalities by 50%!”

“As we play our societal transformative role as a University by directly contributing to the road safety of the Kenyan citizens,” continues Prof. Kokwaro, “we hope that empirical evidence from this research helps the relevant stakeholders to reformulate policies on road safety, training, vehicle inspection, and design of roads. The current Expressway construction and any major road projects should be implemented with the safety of road users in mind. We look forward to simulating it too upon commission by government to give future safety recommendations!” he says with a smile.

The grand vision of this research project is to engage the marine and aeronautics transport sectors as it traverses various aspects of society, such as the Southampton counterparts in United Kingdom have done. Currently running on a 3-year £180,000 budget, the STAR project hopes to secure funding that would facilitate training provisions for 3 PhD students and 2 Post-doctoral fellows (one from government and one from academia).

“We are the drivers of change, literally!” concludes Prof. Kokwaro with what he jokingly calls scientific enthusiasm.

This article was written by Francis Kabutu and Anna Jessica Munya.

If you have a story, kindly email: communications@strathmore.edu

Phase I next to ICT Offices